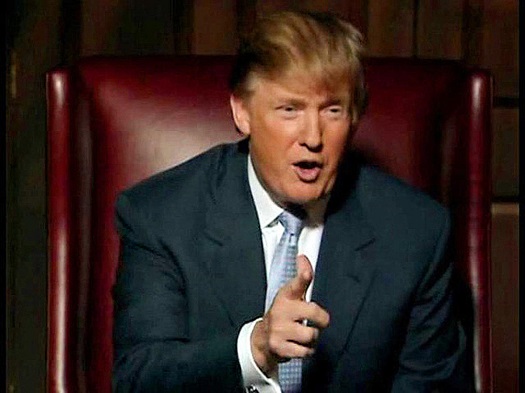 People like dynamic excitement in elections. This is why I believe Bernie Sanders is more electable than Hillary Clinton. And I could write a whole piece on how that phenomenon is behind Donald Trump’s unexpected and meteoric rise to the top of the Republican polls. It’s fertile ground and there’s a lot there, but honestly, I think it’s a pretty small chunk of the reason that Trump is in the catbird seat for the Republican nomination. I think it avoids why he’s actually such a strong candidate and why, ultimately, he has a very good shot at the nomination and even perhaps the presidency.

Now you could very easily rebut this by saying there’s not an honest bone in Trump’s body. Many have posited that his whole thing is an act, that he says whatever he thinks will rile people up the most, regardless of his true feelings (if those even exist anymore). His hair is famously fake and surely anyone who goes that length to brag so repeatedly is covering for a mighty insecurity. Truth? Sincerity? Really?

The type of sincerity that Donald Trump offers is one about the political process and the political perspective of his followers and, perhaps, the whole Republican Party. Make no mistake, the Republican Party is almost entirely against immigration. They are fearful of outsiders, of foreign nationals, even (in many instances) of non-whites generally. The whole lineup in Thursday’s debate probably feels that way to an extent, or is at least trying to galvanize people who largely feel that way. So when Trump makes outrageously racist statements about Mexico shipping rapists and murderers north of the border, his statements are not different in kind from those his Republican colleagues would make. They are merely different in degree.

When Trump talks about the bounty of his riches and how he wins in business, he is espousing time-honored Republican (and American) values. Most of the other candidates want to be able to do that, but they have some notion in their head that such claims would be scandalous or indecorous. Similarly, Trumps comments about women reflect a wider ideology at home in much of the Republican Party about the role of women and their rights in society. FoxNews, desperate to assassinate Trump’s candidacy as quickly as possible, tried to zero in on this during the debate and Trump doubled-down. His popularity isn’t suffering, because it’s that kind of perspective that his supporters like. The folks sharing the stage would have similar policies toward women as Trump would. Trump is just going to be upfront about it, and about how he really feels.

Most Republicans (and Americans) want to get ahead of other countries very badly. They’re terrified about China, they’re concerned about our place in the world, they’ve been manipulated (again again again) into thinking war is necessary against [insert hyped Middle Eastern threat here]. Trump just comes out and uses the words folks are using at home to describe these threats and outsiders. It’s the same sentiment that a Bush or a Cruz or a Walker might be trying to get across. But it’s more direct, more biting, and thus more powerful. Because it exposes that Trump has the directness and sincerity to come out and say what’s really behind these political stances, rather than tiptoeing around it. Trump may look like a circus act, but if your alternative is playing with small wooden blocks, crudely shaped like a lion and tiger, wouldn’t you rather just go to the actual circus?

This is what makes it so hard for Trump’s rivals to get an edge on him, how he is hamstringing them all in both an individual debate and the national discussion. To distinguish yourself from Trump, you either have to diverge with him on a policy issue, or you have to sufficiently equivocate so as to seem substantially weaker on it. Neither of these are good strategies. He has cornered all the classic Republican tropes of candidacy in terms of advocacy, while doing so more brashly than others on every front. If you believe in something, you don’t want the person at the top of the ticket quietly mumbling about how it might be a good idea, but there will have to be compromise. You want them boldly embracing it, shouting it from the rooftops, adding bravado! And no one, not even the mighty Ted Cruz (whose territory Trump wholly and masterfully usurped) can out-shout The Donald.

This gets particularly effective when it comes to a subject like money in politics. The shadowy world of the so-called Billionaires Primary and the Koch Brothers and all the masses of cash that Citizens United has helped accelerate into the political process is something most people don’t want to talk about publicly. In an effort to embarrass Trump, FoxNews brought it right to him in the debate. They pointed out that as someone usually on the other side of the money/politicians hookup, he’d supported a bunch of Democratic candidates in the past. The sheer genius of his response has been sorely under-appreciated by the media and most pundits responding to the debate:

MODERATOR: You’ve also donated to several Democratic candidates, Hillary Clinton included, Nancy Pelosi. You explained away those donations saying you did that to get business-related favors. And you said recently, quote, “When you give, they do whatever the hell you want them to do.”

MODERATOR: So what specifically did they do?

TRUMP: If I ask them, if I need them, you know, most of the people on this stage I’ve given to, just so you understand, a lot of money.

TWO OTHER CANDIDATES: Not me.

ONE OTHER CANDIDATE: But you’re welcome to give me money if you’d like, Donald.

[More assorted bidding for Donald’s money and discussion of opponents he paid in the past.]

TRUMP: I will tell you that our system is broken. I gave to many people, before this, before two months ago, I was a businessman. I give to everybody. When they call, I give. And do you know what? When I need something from them two years later, three years later, I call them, they are there for me.

OTHER CANDIDATE: What did you get from Hillary Clinton and Nancy Pelosi?

TRUMP: Well, I’ll tell you what, with Hillary Clinton, I said be at my wedding and she came to my wedding.

Did you see what he did there? Not only did he set up a situation that literally illustrated the nature of his opponents’ groveling for money and the position of power that this put him in, but he simultaneously condemned the system that made it possible while reveling in the advantages he’s gained from it. And because he’s Trump, so brash and forthright, he can get away with that. And then, the kicker, the coup de grace, he turned gifts to Hillary on their head to embarrass her with them. Hillary and all that she represents gladly attended the wedding of Donald Trump and his third wife, something we all cannot really imagine Hillary enjoying, just because Donald asked. That’s the power of his money.

After a moment like that, how could anyone feel great about supporting one of Trump’s Republican rivals over Trump? Because here’s the thing: Trump is pointing out that pretty much whoever you’re voting for (*not Bernie Sanders, obviously), you’re voting for Trump. Even voting for Hillary is voting for Trump! His money gives him so much leverage over all these people that they are so desperate, they will literally grovel for money from the front-runner while they are debating against him.

We all know this corruption exists. We all read (or are at least aware of) dry and well-researched articles about the fact that whatever vestige of democracy we once had has been sold to the plutocrats. By bombastically illustrating it, by living it on the stage, Trump is simultaneously the embodiment of this system and its repudiation, reaping the best of both worlds. He can say to the public “You want power and money controlling your system? Go straight to the source! Cut out the middle-man!” and lampoon the system that makes this influence possible. Because it is, objectively, absurd. But no one is getting out of it.

It remains to be seen whether FoxNews and all the terrified Republican establishment hacks can assemble enough money and bad press to sufficiently tarnish Donald Trump and get him off that stage. But I really really doubt it. They may keep him from the nomination, making that old electability argument that leads to milktoasty losers like Romney and Dole, Kerry and Gore, but even then his bravado could lead him to a devastatingly upheaving third-party candidacy. Whatever the Republican establishment does to try to beat The Donald, they can’t buy him off. Which is what makes him so scary to the political order running this nation and so appealing to the voters who are sick of it.

Storey Clayton is a writer, debater, poker player, and non-profiteer. He spent nine years as an academic debater, winning the 2001 North American Championship for Brandeis University. He spent five more as a coach, guiding the Rutgers University team to second at the 2014 National Championships. He is the author of three novels (one published) and the creator of the popular online quiz site The Blue Pyramid. Originally from the West, Storey just moved from New Jersey to New Orleans, where he is reporting for Clarion Content on politics, philosophy, and life in the South.